The Government Is Also Kidnapping The Elderly For Cash 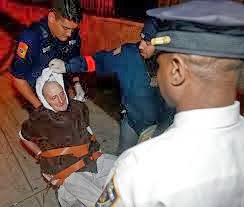 The Government Is Also Kidnapping The Elderly For Cash

Yes, it's true. No longer is the Federal, State and Local Government's involved in just stealing children for cash via your American tax dollars(Federal Title IV and Violence Against Women Act monies), the same usual evil players are now also increasingly stealing our parents and grandparents, specifically the elderly. “ Who would have known” you may be asking....well, I and others knew this was coming and it was just a matter of time before more of our helpless citizens became terrorized by our government. In fact, we knew because of the inaction of Christians regarding the removal of evil, those who participate in such evil practices of “legalized kidnapping” are finding the stealing of the elderly to be quite lucrative and easy. Billions of US Dollars are filling the coffers of those who participate and it appears that very few are trying to stop them.

How does this work ? How exactly are the elderly being “stolen” and kidnapped for cash ? Well, it works like this.... Just as children have so called “protectors” such as “Child Protective Services:, adults also have in many of the same counties and States; “Adult Protective Services” also. Although the thought of any type of Government sponsored protection for children or adults(Domestic Violence Programs included), brings doubts to the minds of many of the very ignorant, the truth of the matter is; every one of these Government “services” is not only a bastion of greed for cash, they are also programs specifically designed to kidnap those who are less able to defend themselves from the true terrorists, that is, those who lie to the Federal Government to gain access to those Billions and Billions of US Tax dollars designed to “help” them.

What we are seeing is this--- social workers, “Adult Protection Services Case Workers”, “Department of Social Services Social Workers”, psychologists, lawyers, cops, judges, Domestic Violence Program Workers are all looking for elderly who may be “abused”, either through the actions of others or the elderly person allegedly abusing or neglecting themselves. It is not unusual at all to find these Adult Protection Workers or the DSS Social Workers, DV Workers, and others like them, snooping around neighborhoods looking for elderly to kidnap. All it takes is one report to any number of money hungry judges from one of these evil Government or Government paid employee's and as fast as you can say “Snatch Them !,” here comes the police and an ambulance to haul off grandma and or grandpa to the county home for the elderly and if that grandparent or parent is yours, you will not, I repeat, you will not be allowed to remove your parent/grandparent and may only be allowed very little access to them while they are forced and held against their will until a hearing can be held as to “determine the best interest” of the elderly adult kidnapped. 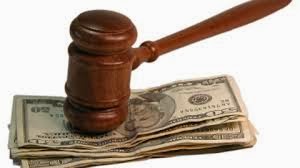 So if grandma/grandpa, mom/dad is being held against their will in one of those facilities, you find yourself in court, and you will spend thousands of Dollars of your hard earned money to pay for a lawyer and have the firm belief that justice will prevail and the truth of your parent/grandparent being wrongly taken will set him or her free right ? Wrong ! The case get's dragged out for weeks, then months. For many who have had this occur to them, they know and have experience their case going on for years. Despite what your court owned lawyer tells you, the truth of the matter is this, the case being dragged out on and on and on is being done so purposely. There is a reason for this... it's called “cash.” Your elderly parent/grandparent is on a Federal Title IV money making “list.” That's right, and the longer your county, your state via their Social Workers, Court appointed probate attorney's, cops, judges, etc keeps your grandparent/parent on that “list”, the more cash they make(works exactly the same for Child Protective Services and Child Support cases)... The judge in the case, the county Department of Social Services, the cops, the lawyers all get a”piece of the pie.” So, just as children are illegally snatched from good parents for the sake of making cash illegally, the same game, and the same source of funding is also used to kidnap for cash the elderly also. God help you if your elderly parent/grandparent has money, the Probate or Family Court Judge will appoint a lawyer friend of his/hers as the “adult guardian” and will allow that “adult guardian” access to pay themselves a “fee” to keep your elderly parent/grandparent on that Federal Title IV list and in court for as long as possible. If you and your elderly parent/grandparent find yourself in this situation, do not expect the “adult guardian”(lawyer) to leave one penny left over. Every Cent will be used up in “legal fees.”

I do realize many of you reading this article had or have no idea that this sort of criminal and terroristic activity is actually going on via our Government and it's evil allies. What surprised me however was a recent discussion I had with a “home health aide” who should have known better. He asked me why his one-hundred year old client had 6 different county social workers “visiting him” nearly on a daily basis. Of course, they were snooping, looking for a scratch on his body so they could run to a local Probate and or Family Court Judge to lie and say “he hurt himself” or “he is being physically abused by his children” or “abused by his home health aide.” There is nothing wrong in protecting the elderly, but the fact is that the vast majority of these government social workers, cops, Domestic Violence Program workers, judges and lawyers lie so that they can get paid more money. One last time, the motivation is cash. Indeed, Billions and Billions of Dollars are easily there for the taking through illegal and immoral means, and those fore mentioned evil doers take advantage of the easily gained cash anyway they can. They don't care who they hurt by taking part in their terroristic activities. Money is their god and they will do anything, even murder or have someone kidnapped to achieve it. 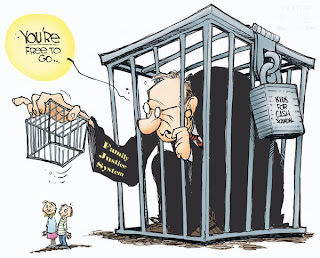 There is only one proper and Biblical answer to fighting this type of evil. As with all cases of evil that have been allowed to grow to this point, the answer is simple yet difficult in many ways to enforce. The answer however is this; those who are true Christians must be prepared and actually gather together now to remove unrepentant evil. Everyday that Christians do not take part in their Biblical duty to remove evil, the worse matters will become. Our Government is no friend nor ally of the family. We who are “awake” and alive to what the Word declares, should already know that evil must be removed and done so quickly. Simply complaining is not enough. If the Church fails to do it's job in ridding our society of all evil, including those who partake in kidnapping elderly for cash, at some point, your parent, your grandparent will be next in being stolen and terrorized. Save a child, save a parent/grandparent, save a family today.... remove the unrepentant evil doers of this world now before you too are judged by God for being silent and turning your head from seeing wickedness of this world.


Proverbs 24:11-12 “if you hold back from rescuing those taken away to death, those who go staggering to the slaughter; if you say, 'Look, we did not know this'—does not he who weighs the heart perceive it? Does not he who keeps watch over your soul know it? And will he not repay all according to their deeds? “


Posted by Black Robe Regiment Pastor at 10:36 AM